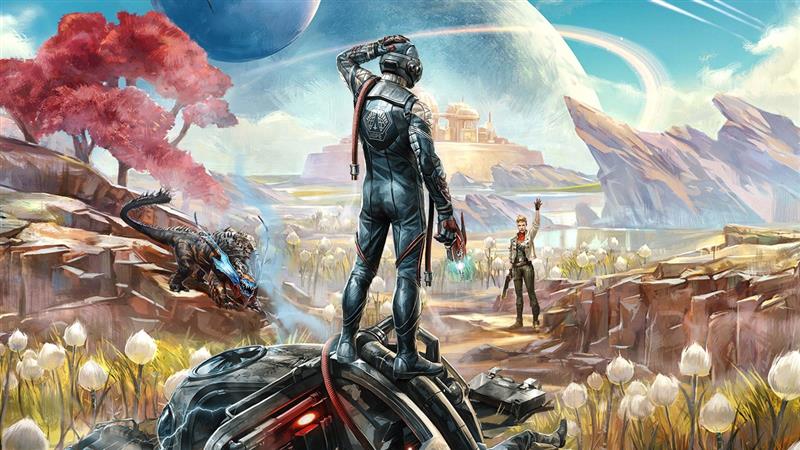 In this enthralling sci-fi action-adventure game, you play as a mysterious stranger who arrives in an exotic system called “Halcyon”—a system inhabited by a failing colony. As you explore different planets, you’ll meet a cast of colourful companions which will help you to dismantle the corrupt governing body controlling Halcyon called ‘The Board.’ However, if you decide being the villain is more your style, The Outer Worlds gives you the choice to work with The Board to ensure the colony’s doom.

While the combat in the game is rudimentary and the level design can be reduced to fetch quests at times, The Outer Worlds delivers on its character customization and RPG mechanics by giving the player complete control over how they play the game. Players can choose what gear and upgrades to purchase, what dialogue options to trigger, and what large-scale decisions to make, all of which affect the outcome of the story. Whether you decide to be the hero and liberate all of Halcyon, be the villain and side with the Board, or be chaotic-neutral and do whatever mission pleases you, the choice is yours alone.

In this masterpiece of a PlayStation Exclusive, you enter the messy world of a Peter Parker who has already graduated university and is a seasoned superhero. Follow his day-to-day double life as he juggles being Spider-Man and a lab assistant to Dr. Otto Octavius. Both lives are thrown into jeopardy when a new gang arrives in New York, known as the Demons, led by the deceptive Mr. Negative.

Almost everything about this game is spectacular, from the intriguing story to the immersive combat. Fighting off criminals using an assortment of gadgets and combos keeps the combat fresh and allows players to innovate and make their own play style. The story, especially its epilogue, is full of emotion and charm. The setting is also incredibly engaging. I can’t help but feel captivated whenever I swing through a city that feels alive or when I scale skyscrapers like the Empire State Building or Avengers Tower. The only issue this game has is the occasional intrusive story mission. The game has you step away from the crime-fighting Spider-Man for fifteen minutes and play as a civilian (like Mary-Jane Watson). Although they do service the story, the stealth missions are nowhere near as fun as the web-slinging Spider-Man sections—doubtlessly the game’s selling point.

A prequel, taking place 12 years before the events of the first game, Red Dead Redemption 2 recounts the final few adventures of the Van Der Linde Gang. Follow the life of outlaw Arthur Morgan as he does his best to fend for himself and his gang in the waning years of the American Wild West.

There is a reason why Rockstar Games took over eight years to develop this game. There are dozens of unique NPC encounters, dozens of motion-captured animations and cutscenes that almost seem indistinguishable from that of real-life movement, a free-roam map far bigger than that of the first game’s, beautiful visuals, and so much more. Issues that this game has are level designs that structure the progression of missions into boring linearity, tedious crafting that make the player mold individual bullets or items, and a slow tutorial that is tiresome to get through on subsequent playthroughs. Despite these small faults, Red Dead Redemption 2 immerses you in the grim world of outlaws and killers.